If you are not redirected momentarily to our new URL,
please click the link below.

How is Shinkowa Pharmaceutical's NMN?

Shinkowa’s NMN has a purity of over 99%, and its safety has been confirmed both in humans and rodents. No other company in the world commercializes nutraceuticals with such a high-purity NMN.
The Institute for Research on Productive Aging has carried out two different purity tests (LC-UV (1) and NMR (2)) on four NMN samples from as many companies, including ours, and the only NMN that has obtained high purity results of over 99% in both tests is Shinkowa Pharmaceutical’s NMN. This suggests that the NMN from the other three companies may contain a great deal of impurities, such as water or heavy metals.
(1): High performance liquid chromatography- UV absorption spectroscopy
(2): Nuclear magnetic resonance spectroscopy

Our products were also selected for a clinical study on NMN conducted by the University of Washington with a grant from the US Department of Defense for their superiority in terms of purity and stability over other companies' products.
Please check the results of the tests mentioned earlier on the following chart: 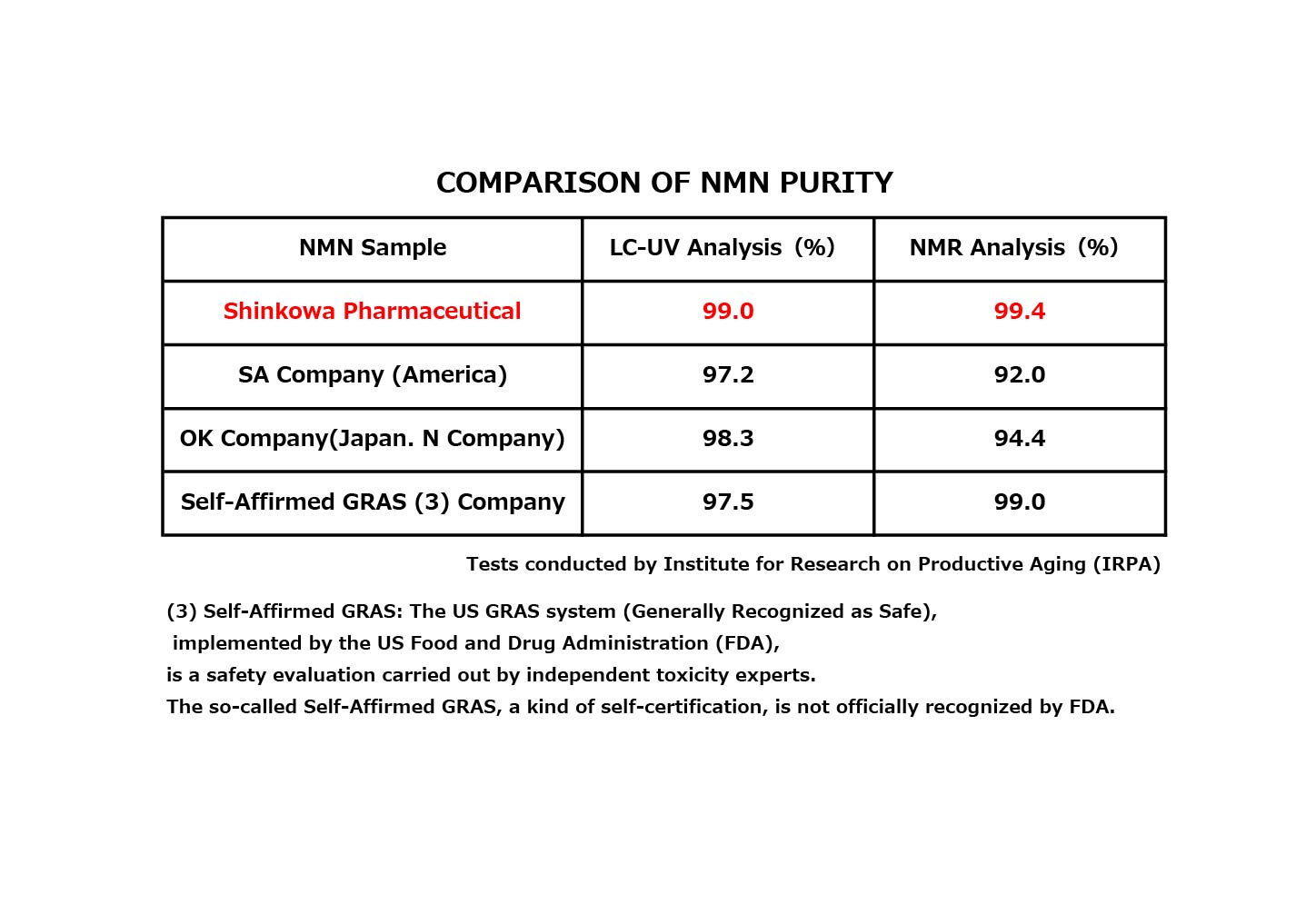 An NMN with low purity obviously means it contains more impurities.
It is not known as yet what kind of adverse effects can result from the ingest of NMN with a large amount of impurities.
Please be aware that you can find on the market products which claim to contain NMN, but whose purity degree (not declared) is low and its safety is not proven.
IRPA’s web:https://www.irpa.ne.jp/


■SAFETY, EVALUATION, AND OTHER TESTS BY SHINKOWA PHARMACEUTICAL
・Purity: at least 99%.
・Accelerated aging test: maintains a purity degree of at least 99% after 3 months at 40 ℃.

About safety, evaluation, and other tests conducted by Shinkowa Pharmaceutical.

Shinkowa Pharmaceutical only uses NMN with the highest purity and stability. In addition to the tests above, we have conducted and completed other safety and evaluation tests and have confirmed its safety every time.

NMN is an intermediate metabolite in the NAD + biosynthesis system and contributes to the body synthesis of NAD +, which decreases with age. Sirtuins, which are believed to have a major influence on aging, require NAD + to carry out their functions, and NMN promotes the synthesis of NAD +, so through the action of the sirtuins NMN is thought to affect the process of aging. Studies that claim that the activation of the NAD+ synthesis system through the administration of NMN mitigates a series of symptoms associated with aging have been reported one after another (see References 1 and 2). For example, professor Shin-Ichiro Imai of the Department of Developmental Biology/Department of Medicine (joint), Washington University (St. Louis) School of Medicine, the foremost expert in aging research, observed the effect of long-term oral administration of NMN on mice, an animal most frequently used in experiments. As a result, improvement of energy metabolism, improvement of insulin sensitivity, increase of bone density and improvement of mitochondrial activity of skeletal muscle, among others, were observed (see Reference 2). However, there are also many aspects of the biomolecular mechanism of NMN that have not been clarified yet. We consider that elucidating these are important issues in the research on aging. Therefore, as a company, we have decided to set up a program to promote a series of studies in order to contribute to the science of NMN and also to the branch of science related to aging. As the first step, in order to elucidate the mechanisms of NMN, we have concluded a research consignment ("Elucidation of Intracellular Mechanism of NMN by Multi-Omics Analysis") with the nonprofit corporation Systems Biology Institute (hereinafter SBI; CEO: Hiroaki Kitano). In this research consignment, omics analyses will be carried out about the effect of NMN on cells, using various human cultured cells with different tissues and growth conditions. It is expected that this will allow us to understand a part of how NMN affects gene expression and intermolecular interaction in cells through sirtuins and the synthesis of NAD+, among others. The results of this research will be published on a timely manner on international journals. SBI CEO Dr Kitano has expressed his expectations regarding the research, "Through long-term administration, NMN is a substance expected to mitigate the physiological problems associated with aging. Although a number of physiological effects caused by the administration of NMN have been reported, the detailed biomolecular mechanisms have not yet been elucidated. This research will comprehensively analyze the effects of NMN at a cultured cell level and I hope it will be the first step leading to the next stage of research on the biomolecular and system biology of NMN." Shinkowa has made donations and commissioned research to the University of Washington and a number of other research and educational institutions to contribute to the promotion of NMN research, and in April 2015 we launched in Japan a line of health foods containing NMN through our own brand “Mirai Lab”. This line was quickly expanded when we launched our cosmetic brands “FACE RICH” and “BODY RICH”. Mirai Lab and NMN are attracting a great deal of attention, and NMN products have been featured in the media as substances that could be effective for rejuvenation and anti-aging.